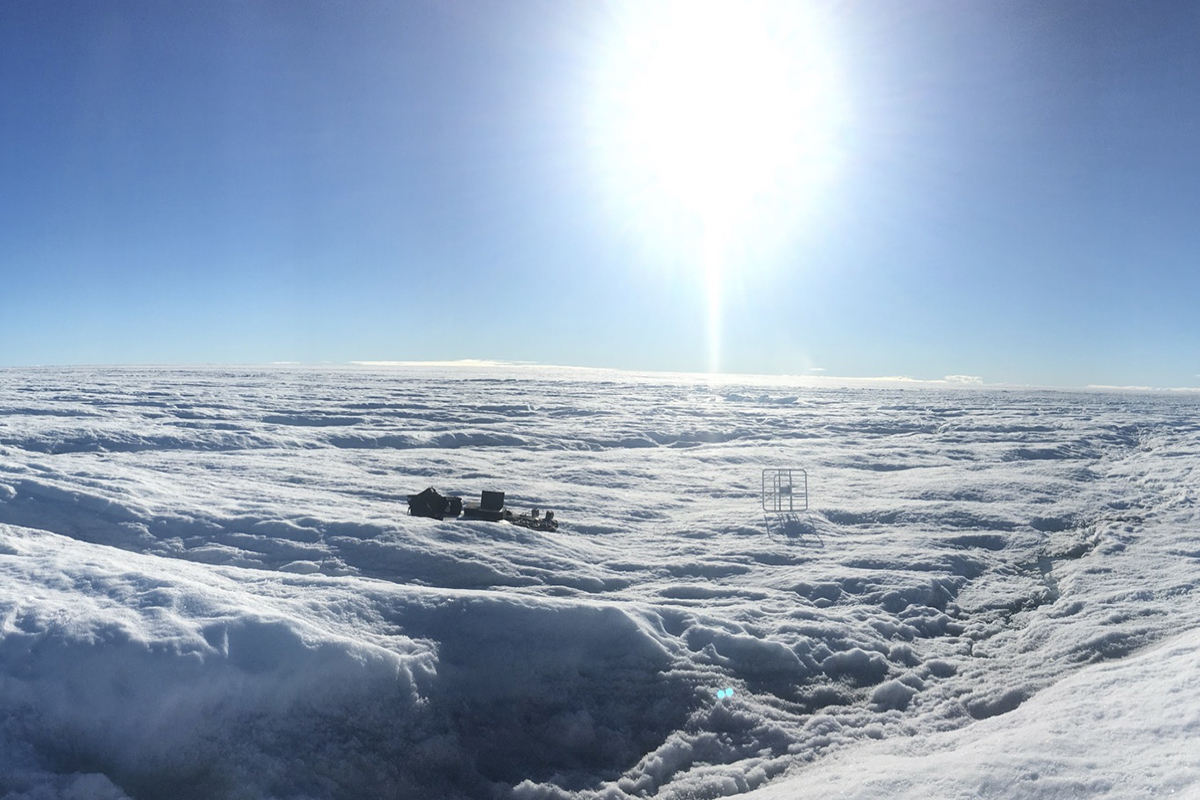 A new method for seeing through ice sheets using radio signals from the sun could enable cheap, low-power and widespread monitoring of ice sheet evolution and contribution to sea-level rise.

The sun provides a daunting source of electromagnetic disarray – chaotic, random energy emitted by the massive ball of gas arrives to Earth in a wide spectrum of radio frequencies. But in that randomness, Stanford researchers have discovered the makings of a powerful tool for monitoring ice and polar changes on Earth and across the solar system.

The experimental setup and test site at Store Glacier, Greenland. Researchers conceptualized a battery-powered receiver with an antenna placed on the ice that can measure ice thickness using the sun’s radio waves. (Image credit: Sean Peters)

In a new study, a team of glaciologists and electrical engineers show how radio signals naturally emitted by the sun can be turned into a passive radar system for measuring the depth of ice sheets and successfully tested it on a glacier in Greenland. The technique, detailed in the journal Geophysical Research Letters on July 14, could lead to a cheaper, lower power and more pervasive alternative to current methods of collecting data, according to the researchers. The advance may offer large-scale, prolonged insight into melting ice sheets and glaciers, which are among the dominant causes of sea-level rise threatening coastal communities around the world.

A sky full of signals

Airborne ice-penetrating radar – the primary current means for collecting widespread information about the polar subsurface – involves flying airplanes containing a high-powered system that transmits its own “active” radar signal down through the ice sheet. The undertaking is resource-intensive, however, and only provides information about conditions at the time of the flight.

By contrast, the researchers’ proof of concept uses a battery-powered receiver with an antenna placed on the ice to detect the sun’s radio waves as they travel down to Earth, through the ice sheet and to the subsurface. In other words, instead of transmitting its own signal, the system uses naturally occurring radio waves that are already traveling down from the sun, a nuclear-powered transmitter in the sky. If this type of system were fully miniaturized and deployed in extensive sensor networks, it would offer an unprecedented look at the subsurface evolution of Earth’s quickly changing polar conditions, the researchers say.

“Our goal is to chart a course for the development of low-resource sensor networks that can monitor subsurface conditions on a really wide scale,” said lead study author Sean Peters, who conducted research for the study as a graduate student at Stanford and now works at the MIT Lincoln Laboratory. “That could be challenging with active sensors, but this passive technique gives us the opportunity to really take advantage of low-resource implementations.”

In addition to visible and other kinds of light, the sun is constantly emitting radio waves across a wide, random spectrum of frequencies. The researchers used this chaos to their advantage: They recorded a snippet of the sun’s radioactivity, which is like an endless song that never repeats, then listened for that unique signature in the echo that’s created when the solar radio waves bounce off the bottom of an ice sheet. Measuring the delay between the original recording and the echo allows them to calculate the distance between the surface receiver and the floor of the ice sheet, and thus its thickness.

In their test on Store Glacier in West Greenland, the researchers computed an echo delay time of about 11 microseconds, which maps to an ice thickness of about 3,000 feet – a figure that matches measurements of the same site recorded from both ground-based and airborne radar.

“It’s one thing to do a bunch of math and physics and convince yourself something should be possible – it’s really something else to see an actual echo from the bottom of an ice sheet using the sun,” said senior author Dustin Schroeder, an assistant professor of geophysics at Stanford’s School of Earth, Energy & Environmental Sciences (Stanford Earth).

From Jupiter to the sun

The idea of using passive radio waves to collect geophysical measurements of ice thickness was initially proposed by study co-author Andrew Romero-Wolf, a researcher with NASA’s Jet Propulsion Laboratory, as a way of investigating Jupiter’s icy moons. As Schroeder and Romero-Wolf worked together with others on a mission, it became clear that radio waves generated by Jupiter itself would interfere with their active ice-penetrating radar systems. At one point, Romero-Wolf realized that instead of a weakness, Jupiter’s erratic radio emissions might actually be a strength, if they could be turned into a source for probing the subsurface of the moons.

“We started discussing it in the context of Jupiter’s moon Europa, but then we realized it should work for observing Earth’s ice sheets too if we replace Jupiter with the sun,” Schroeder said.

From there, the research team undertook the task of isolating the sun’s ambient radio emissions to see if it could be used to measure ice thickness. The method involved bringing a subset of the sun’s 200- to 400-megahertz radio frequency band above the noise of other celestial bodies, processing massive amounts of data and eliminating man-made sources of electromagnetism like TV stations, FM radio and electronic equipment.

While the system only works when the sun is above the horizon, the proof-of-concept opens the possibility of adapting to other naturally occurring and man-made radio sources in the future. The co-authors are also still pursuing their original idea of applying this technique to space missions by harnessing the ambient energy emitted by other astronomical sources like the gas giant Jupiter.

“Pushing the frontiers of sensing technology for planetary research has enabled us to push the frontiers of sensing technology for climate change,” Schroeder said. “Monitoring ice sheets under climate change and exploring icy moons at the outer planets are both extremely low-resource environments where you really need to design elegant sensors that don’t require a lot of power.”